Is Driving on a Suspended License a Criminal TRAFFIC TICKET?

Yes, driving on a suspended license is considered a crime in California. And, it is usually given as a regular traffic ticket. It may be an infraction. Regardless of whether it is an infraction or a criminal misdemeanor, the DMV consequences are the same if convicted: 2 negligent operator points for 7 years.

What can I do about a ticket for driving on a suspended license?

How do I get rid of the criminal charge?

We can do that for you in most cases. Our attorney has handled hundreds of suspended license and no license cases.

Another shock to most people is that driving is not a legal "right" afforded by the constitution. Holding a valid California Drivers License is a legal privilege, less than a right. This is surprising because most people in Los Angeles or Orange County could not live without a car. We need to drive with a valid California Drivers License to get to work, buy groceries, medical care, and so on.

To avoid risk of being charged with driving with a suspended license, is to be aware of the causes of a license suspension. The cause of a suspended driving privilege may be a failure to appear on a traffic ticket or on a criminal misdemeanor case in court, a failure to satisfy a judgment, a failure to pay child support, a result of a conviction for driving under the influence of alcohol, an APS administrative per se law suspension due to driving with BAC .08% (blood alcohol content) or greater, a DMV NOTS negligent operator administrative actions, a re-evaluation assigned by a police officer, or for other reasons.

Sometimes, the California Dept. of Motor Vehicles will not send proper notice of a suspension due to a clerical error. In other circumstances, a driver may fail to update his or her address with the California DMV. A police officer may give verbal notice and put it on file with the DMV, but the driver may not understand the significance of this notice, nor what a suspended license is. When a licensee/driver does not receive notice, or lacks understanding of the suspension, the license will still be suspended.

Whether a person driving with a license is aware of their license status is a critical element of the criminal charge for driving without a license or driving on a suspended license. In other words, an element of the criminal misdemeanor of driving with a suspended license is “knowing” that the license is suspended. If a driver is unaware of their license status, and last they knew it was valid, then they are not committing a criminal act even if the license is actually suspended. However, once a misdemeanor is filed in the Superior Court of California in Los Angeles County, it requires a traffic criminal defense attorney to convince the prosecution and or the court that the charge is without merit.

Our attorney has a proven record of resolving such cases with dismissals. In other situations, the Law Office of David Dastrup resolves cases like this with reductions from criminal misdemeanors to non-criminal infractions. When not dismissed, it may be more important for us to reduce driving on a suspended license charges to driving without a license. Specifically, avoiding a conviction of CVC 14601.1(a) in exchange for 12500(a) of the California Vehicle Code. The reason this is so important is to avoid the 2 points, two negligent operator points, on a driving record for 7, seven, years.

Contact our attorney without delay if you are being accused of a traffic crime. Now is the time to contact Attorney David Dastrup at 310-817-5899 for our Torrance California 90504 Main Law Office, or 562-852-0212 for our Long Beach California Law Office, or 714-866-8042 for our Orange County California Legal Defense at West Justice Center in Westminster, OC, or Santa Ana Court, Central Justice Center, OC. Courts in Orange County and Los Angeles County are all part of the Superior Court of California. We defend you in San Diego County traffic courts and criminal courts. Remember, driving without a valid license in California is a criminal act. We are here to serve you. We can help you throughout all of Southern California.

Driving on a Suspended License 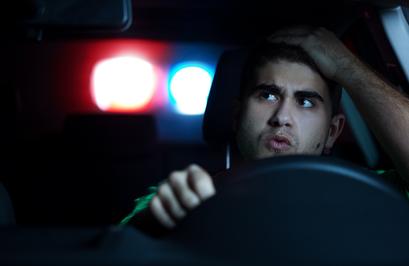